Importance of Sector to South Africa

South Africa has a world-class and internationally recognized formal agricultural sector, which according to FNB employs over 865,000 people across 39,966 commercial farms in South Africa. Polity reported in June that South Africa also has approximately 2.5 million small-scale or subsistence farmers.  Most of these small-scale farmers are based in rural areas and isolated from key markets and services associated with commercial farming.

Prior to the discovery of precious metals in South Africa, the country did not have a need for mechanised and mass scale farming. The booming mining industry caused a huge influx of people that needed to be fed, and agriculture was industrialized, modernized and expanded to meet the growing needs.

According to Grain South Africa the ability of South Africa’s agricultural output to meet its domestic feeding needs has been on a steady decline since the mid-1970s and South Africa has not been self-sufficient in terms of the main food items it consumed since the mid-1990s.   A dramatic contraction of the formal agricultural industry will have severe consequences as the weak buying power of the Rand will leave many people unable to purchase imported food.

It is against this backdrop that the impact of COVID-19 and the sector’s future beyond COVID-19 must be viewed.

Impact of COVID-19 on the Sector

The formal agriculture sector, in sharp contrast to other industries, is looking forward to having a stellar year despite COVID-19 related disruptions.

In August 2020 chief economist Wandile Sihlobo of Agricultural Business Chamber of South Africa (Agbiz) stated that the agriculture sector grew almost 28% in the first quarter of 2020 and that he expects it to grow between 20% to 25% in the second quarter. The improvement follows a dismal 2019 in which the sector shrank for four consecutive quarters, contracting by 7% overall.

Paul Makube, Senior Agricultural Economist at FNB Agri-Business, announced that the National Crop Estimates Committee (CEC) confirmed in August that SA’s total summer grain and oilseed output (17.85 million tons) was one of the largest on record and 34% higher than 2019

The oilseed complex flourished in 2020 and the soybeans estimate is 7.8% higher than 2019 despite a 3% contraction in planted area. The sunflower estimate is 13% higher year-on-year on much better yields as planted area also decreased by 3%. The groundnuts harvest jumped 169% year-on-year due to an 87% increase in hectares

According to a report by Business Insider, the total maize crop of 15.54 million tons was 38% larger than last year.  Makube has indicated that the first winter crop estimates came in 32% higher off the back of good rains and snow in the Western Cape while Sihlobo added  that the winter wheat harvest may be the biggest in a decade, while the barley and canola harvests could be the largest on record.

Makube states that, “interestingly, grain prices – especially maize – have been unseasonably strong and will encourage farmers to plant more in the new crop season amid favourable production conditions with the La Niña  weather pattern in the forecasts.”

The wheat spot price in South Africa was around 9% higher than the same time in August 2019 and South Africa is also looking forward to reduced wheat imports According to Sihlobo, South Africa has imported around 51% of its annual wheat consumption over the past decade but that the improved crop meant that South Africa would need 300,000 tons less wheat from importers in 2020.

Not all the commercial farming sectors prospered though, with grapes, tobacco and wool farmers being negatively impacted by a large drop in demand, largely caused by the tobacco and alcohol bans, as of August 2020.

The Africa Report indicated in July that red meat, poultry, milk and potato producers were sitting on stockpiles and struggling to shift their stock in the domestic market due to the shutdown of sit-down restaurants to observe COVID-19 health and safety protocols.

In July 2020, a Bizcommunity report indicated that the greatest challenge for exporting farmers was that activity in some ports has been slowed down by intermittent stoppages due to the detection of personnel infections that triggered disinfection protocols. Delays caused port congestion prompting some of the shipping lines to start implementing surcharges or even by-passing ports.

This was corroborated by Fresh Plaza that reported in June that Cape Town Container Terminal was operating at 50% capacity at one stage during the month.

Small-scale and subsistence farmers also felt the brunt of COVID-19, probably more so than the negatively affected commercial farmers.  The Institute for Poverty, Land and Agrarian Studies (PLAAS) of the University of the Western Cape indicated that small-scale and subsistence farmers have suffered tremendously because of the pandemic and lockdown measures, more so than their large commercial counterparts.

The Polity report states that the closing of fresh produce markets and the initial curtailing of street vendors, two of their main routes to market for these growers, were seen as the key reasons for these farmers struggles. The report stated that most small-scale producers are locked out of the formal supermarket supply chains and had to find alternative markets to sell their produce.

The loss of income, during the hard lockdown, for rural and peri-urban communities served directly by these small-scale farmers would also have led to a loss of revenue by those farmers.

The following figure indicates the operational status for organisations in the Agriculture sector, as per the BeyondCOVID survey findings.

The following table indicates the impact of COVID-19 on revenue, staffing working arrangements and retrenchments for organisations in the Agriculture sector based on the BeyondCOVID Business Survey. 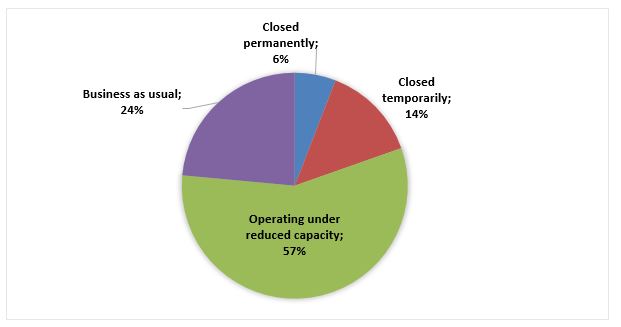 Table 2: Impact on Revenue and Staff

Beyond COVID-19, the biggest opportunity for the formal agricultural sector lies in the upgrade of export related infrastructure. AllAfrica quoted Paul Makube, Senior Agricultural Economist at FNB Agri-Business, in July, saying that “The biggest potential for the sector is in post-COVID-19 upliftment of critical infrastructure such as rail, ports, water and related services to support the high-value export commodities such as citrus, avocados, macadamias,”

The table below indicates the outlook going forward on retrenchments, funding and work arrangements for organisations in the Agriculture sector based on the BeyondCOVID Business Survey.

Beyond COVID-19, a sizeable opportunity for the informal and small-scale agricultural sector lies in successfully integrating the farmers into what is now a very sophisticated and global food market.

The Jobs Fund, which is part of National Treasury, has embarked on a variety of projects to establish and assist agricultural intermediary institutions that integrate small scale farmers into the global food industry, establishing a template for others to follow.

Digital technology will play a critical role in organizing the small-scale farming community for their collective benefit.  Active participation of the government in negotiation of trade agreements that benefit local farmers, be they formal or currently informal, will also play a significant role.  Financial engineering to manage the risks associated with small scale farming will also be required to ensure sustainability.

The need for digital technology is further evidenced by software giant Microsoft South Africa announcing an investment of up to R40 million (US$ 2.3 million) in South Africa’s agriculture sector, as reported by VentureBurn in August 2020. The report noted that the investment was aimed at informal smallholder farmers.